Populism in media: the voice of “the people”?

How does the media generate populism? Alexa Vaagt and Hanna Nyzhnyk explore the phenomenon of populism in the print media and television of Ukraine and Germany. Misinformation, polarization, and inappropriate emotionality are all typical strategies of populist media in both countries – part of why this so-called „journalism“ needs to be counteracted strongly.

As media experts say, the rise of populism is caused by the weakness of political parties, and politics itself is a big field for manipulation and loud, but empty language. Imagine the news would say something like this:

„Today’s article, though, has very special meaning because today, we are not merely transferring power from one newspaper to another, but we are transferring power from the whole media world and giving it back to you, the people.“ (modified quote from one of the most populist people in power, soon to be ex-president of the United States Donald Trump).

Hoping to have immersed you into the rhetoric of populism with that, let us introduce you to the typical motives and strategies of this phenomenon.

Populism is a broad and rather abstract term, difficult to define because it has been manifested in various dimensions through the years. Cambridge dictionary gives us the following explanation: populism represents political ideas and activities that are intended to get the support of ordinary people by giving them what they want. Additionally, it incentivizes divisive rhetoric, hyper-partisanship, and disinformation.

To create a perfect environment for the growth of populism, there needs to be a charismatic leader with straightforward political interests. Populist politicians can be recognized by their use of direct appeals to the people as a political instrument.

Populists like to defame the press as „fake news“, but their success depends on media coverage as a source of dissemination (i.e. the act of spreading news), and individuals to follow and nod to the instructions given. This might create beneficial conditions for political manipulation and the control of potential voters. By ensuring media coverage, politicians are given a wide choice of tools to manipulate with: from generating these tools before elections, to the selective exposure of facts and topics, and publishing biased polls and surveys.

The Populism Barometer survey from 2020 shows that 20,9 percent of German citizens who are entitled to vote hold populist views. The role of the media in influencing this trend should not be underestimated. Robert Vehrkamp, one of the authors of the study, claims that populism has 3 dimensions: exceptionality of nation’s will, anti-establishment, and anti-pluralism.

The survey found that right-wing voters are very likely to satisfy all three dimensions. Almost 90 percent of those who voted for the right-wing party „AfD“ have populist tendencies. At the same time, this is the party that mobilizes against publicly funded media and has adopted an anti-press language. By pointing out a supposed left consensus in journalism, they present themselves as the alternative voice of the German nation, exposing the „fake news“. However, there are newspapers that are very useful for the populist party, as they use similar strategies in order to provoke negative feelings towards the government.

The mobilization of an anti-establishment attitude is typical for populist media, which can be illustrated with the rhetoric of „us“, the public, and „them“, the government, that is already being used in their attention-grabbing headlines. Quotations are often taken out of context to create a dramatic and emotional tone. Moreover, right-alternative media tries to push the boundaries of the sayable with antisemitic and racist content. Lorenz Blumenthaler from the Amadeu-Antonio foundation, which researches on the extreme right in Germany, explains the concept of „dog-whistling“, a strategy of the right media to spread discriminatory ideas through a coded language. That way, their journalism is meant for a particular audience that knows the „hidden meaning“ behind it.

Both, populist politicians, and the populist press, like to play the Blame Game – shifting responsibilities for crises onto established parties and the government, but also to refugees and migrants. Also through picking up conspiracy theories, right-wing journalists provoke enemy images and hate, says Blumenthaler. This kind of reporting strongly polarizes the public opinion into those who internalize xenophobic and anti-elitist bias and those who reject this kind of position even more.

This is relatable to both Ukraine and Germany. The main perpetrators of populist fake news in Ukraine, according to numerous Ukrainian media expert’ statements, are Vesti, Komsomolskaya Pravda and Segodnya newspapers.

„They have a pro-Russian narrative, usually following the agenda of their owners and are writing materials against the EU development of Ukraine, focusing on the audience who believe in Soviet Union,“ said a Ukrainian media expert. „Also, very often their stories are not fact-checked, so I am not sure what percentage of imagination there is. Usually independent media do not consider these newspapers as worthy ones.“

An opportunistic approach using populism for the polarization of discourse so far has had little influence on the formation of EU policy towards Russia, since the annexation of Crimea and the destabilization of Eastern Ukraine. Crimea and the East of Ukraine have also become popular topics of manipulation in populist media.

Media in Ukraine: „Emotional declamations instead of rational specifics“?

In Germany, there is a huge market of right-alternative print media, while in Ukraine especially TV channels use these strategies. With different backgrounds and initial positions, Ukraine and Germany both share similar strategies for involving political interests in media: toxic speech, putting forward strong opinions on polarizing issues, and disinformation. Media representatives use these strategies to wrap their political interests in a sellable cover.

„Ukrainians usually tend to easily idealise someone, with help of the media, and then ruin the image of this person as quickly as they idealised,“ said Oksana Piddubna, former journalist for BBC Ukraine. „And the result of the pro-president party in these local elections showed it pretty well.“

She suggests that the most vulnerable readers are the people in regions with a lack of access to different media, and pensioners. Populists appeal to the poorly educated masses and deny scientific expertise. Media, being middlemen to transfer the message, are automatically negating the journalistic values and standards of impartiality. 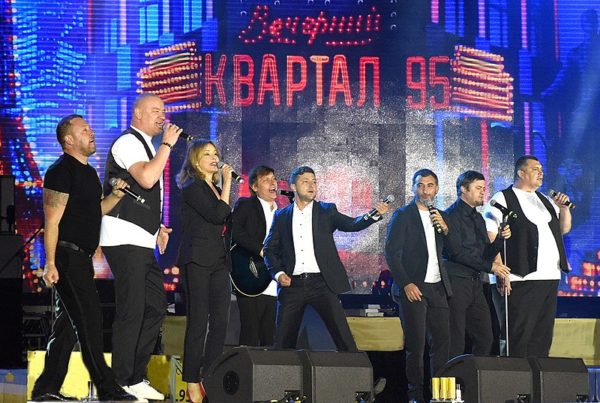 The President of Ukraine in the prime of his career as an actor. I Photo: Vadim Chuprina

The tendency to romanticize things has possibly led to the election of famous comedian Volodymyr Zelensky as new president of Ukraine in 2019. The fame of being a pro-populist humorist, and of being the protagonist of a TV-series in the role of – guess who? – the president of Ukraine – has affected his results. Ukrainian media portal Liga News held a survey on request of USAID to discover the reasons Ukrainians voted Zelensky. Only 16% of respondents have claimed that personal appeal was the motive, while voters of his main opponent and former president of Ukraine Petro Poroshenko were convinced that they voted for Zelensky guided by emotions, not mind, and because they identified him with the protagonist of TV series of the film „Servant of the People“. Meanwhile, the local elections of October 2020 finished with major setback for his team – presidential party candidates have lost in major Ukrainian cities, even in the current president’s hometown.

The TV network which broadcasts programs featuring Zelensky had a share of 10% of Ukrainians watching in 2018. During the 2019 presidential elections, the channel supported Zelensky, while actively criticizing the current president, Petro Poroshenko. In March 2019, a few days before the first round of elections, the program „Ukrainian sensations: 50 shades of Petro Poroshenko“ accused Poroshenko of committing crimes, including involvement in the death of his brother. Poroshenko called the channel’s actions a media attack and blackmail, announcing plans to sue. „The target audience of populists hears what they want to hear,“ said a freelance journalist who preferred to remain anonymous. Representatives of populist media use this as their tool to act on.

No more drama in journalism

Contemporary populism is undoubtedly a challenge to democracy in both Germany and Ukraine, which becomes an even sharper issue with the help of the media. Media should not be a stage for populist politicians and their, often right-wing, beliefs. Journalism is not a TV show – why the dramatic tone? The kind of emotionality often accompanying populist press does not match the goal of an informative and impartial journalism. Sadly, the strategies of attention-grabbing seem to work, as both Ukrainians and Germans consume populist media a lot.