Let’s bring the EU into the media

An Article Series about European Reporting 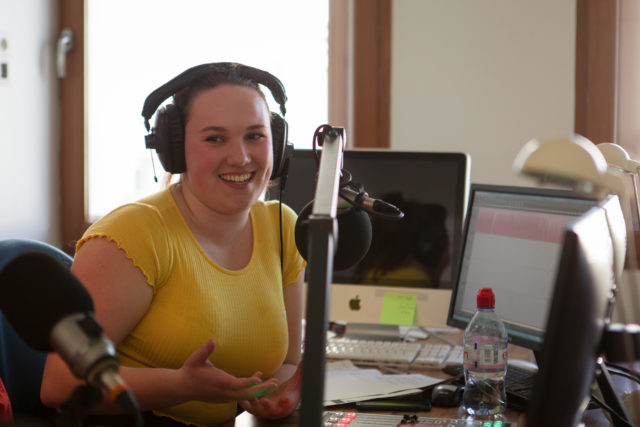 Euradio: the balancing act between European and local reporting

„Something needs to change.“ That was the thought of the French journalist and convinced European Laurence Aubron when the French population voted in a referendum against the treaty establishing a Constitution for Europe in 2005. Consequently, she founded the association Euradio in the French city of Nantes, and one year later, a European radio program started. The ambition: to inform French citizens about what the European Union does for them, where it concerns their everyday life, and how it intervenes at a local level.

The European Union is an enormous aggregate. But it’s not only a huge administration in Brussels or Strasbourg – it has a big influence on the everyday life of all its citizens. Our nutrition for example: products in our supermarkets have to follow regulations decided on by the European Union.

It’s sometimes complicated to understand what actually happens in the European parliament or the European commission. Journalists can help, but when they talk about the European Union, it’s more often in a negative way. An inevitable consequence, EU citizens become disinterested, or develop a generally negative view on the EU.

Euradio wants to find an answer to the problem. The radio station would like to give the citizens the possibility to have more information about what the European Union actually does, especially in their city and on the local level. They call this concept „local-European journalism,“ or „European journalism of proximity“. „We do not only have a local or national view on a topic but also a European one. We show where the European Union is represented on a local level, for example in cultural events“ explains Hélène Lévêque, who is responsible for Euradio communication.

On the other hand, they also try to explain what impact a European decision actually has on the local level. To accomplish this, the editorial staff is composed of journalist from all over Europe. Hélène Lévêque explains: „In the beginning, we had the idea of working with one, two, or three professional journalists who come predominantly from France.“ In addition to that, they also started an internship programme.

Euradio Academy: getting another perspective

A team of young Europeans would come to Nantes for an internship or voluntary service for five or six months. The idea was that young participants could treat the local, European news with another perspective: their unique, cultural backgrounds and different languages. Today, more than 250 young Europeans from around 30 countries have participated in the Euradio Academy (in French, „Académie Euradio“). The participants develop skills in journalism, always with a view toward to the EU. Not to mention, with regard to their future career, as Lévêque adds: „We hope that the young journalists will keep in their future career this European regard, and also the delight of talking about Europe.“

The future of European reporting?

Today, Euradio owns 18 frequencies. Lots of people in different French cities, and also in Brussels can hear the broadcast. But not all of the frequencies are activated yet. „Our goal is that we can activate them in the next two or three years and have local editorial offices in all these cities“ says Hélène Lévêque. Until now there are (besides Nantes) offices in Lille, Lyon, and Strasbourg. „We would like to copy the system that we constructed in Nantes, becoming an intersection for bringing Europe into the heart of these cities“ continues Lévêque. Perhaps in a few years we could find these stations all over Europe – if the mission of Euradio continues to be successful.