A New Rhetoric: The EU’s Shift Towards a More Courageous Attitude Facing China

Germany had an ambitious goal for its EU council presidency: Putting China on a level playing field with the EU by helping to negotiate a new trade agreement. COVID-19 might have squashed those ambitions. Still, the pandemic has shown European leaders that more independence from China is badly needed. 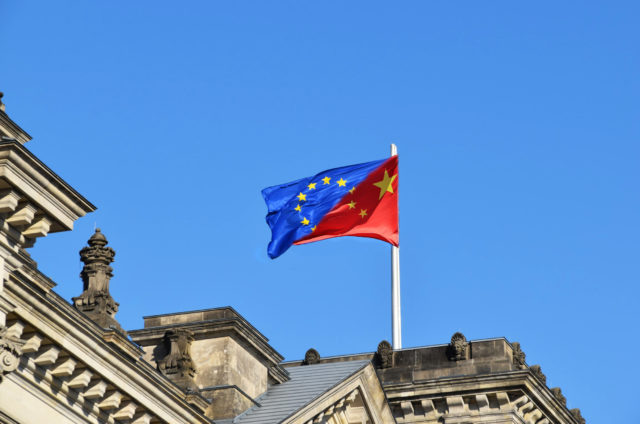 Starting in the early 2000s, China has grown to be an economic power that can no longer be belittled or ignored. Tirelessly, Chinese investors have gained influence all around the world, backed by a state-run capitalistic system. Last year, Chinese enterprises invested 12 billion Euros in the EU member states alone.

Before the novel Coronavirus spread across the globe, China and the European Union were in the midst of negotiating a new investment treaty, the EU-China Comprehensive Agreement on Investment. The main objective for the European Union in this matter is to reach more reciprocity, an equal economic exchange.

William Fingleton, Head of Press & Information at the Delegation of the European Union to China, notes, „European companies operating in China do not benefit from the same level of transparency and fair competition as those enjoyed by Chinese companies in the EU market.“ He believes that the new treaty could help level the playing field between European and Chinese companies.

Those crucial negotiations continue while Germany holds the EU council presidency until the end of the year. In this role, the Federal Republic sets the agenda for the EU Council and acts as a mediator between the 27 countries of the European Union. One of the main goals will be to redefine the role of the European Union towards China. „The policy on China adopted by all EU institutions and Member States should be united and balanced, and shaped by long-term common EU interests and values“, the programme for the German council presidency states.

Joshua Rosenzweig, Amnesty International’s Deputy Regional Director in Hong Kong, believes that Germany’s council presidency might have a large impact on EU-China relations in the future. „China sees Germany as the strongest power within the EU. What Germany says and does holds a lot of weight. Germany can use that leverage to push the EU further towards a more forceful response to China“, he says. He also believes that China has lost much of its sympathy from German economic players: „The German business community has realised that China’s undermining of the international rules-based system does not work in the interest of German business.“ He argues that this shifted perception allows German political leaders to take a more critical stance towards China with regards to human rights.

Originally, Chancellor Merkel had planned to hold a flagship summit with the Chinese and the EU’s heads of states. The pandemic interfered with this plan: Both the summit and visits to China by the President of the European Commission, Ursula von der Leyen, and the Chancellor had to be cancelled. „We are trying to support the commission the best we can in this negotiation. We would really like to conclude the trade agreement with China during our presidency – but not at all costs“, says Dr. Susanne Hegels from the German Ministry for Economic Affairs and Energy. „There was a video conference between von der Leyen and the Chinese government on the 22nd of June, where each side’s positions on the treaty were clarified.“ Ursula von der Leyen at the podium and Angela Merkel on screen at a joint press conference to commence the German EU-Council Presidency, Photo: European Union, 2020

Her remarks reflect a new rhetoric towards China. Multiple EU officials have recently called the People’s Republic a negotiating partner but also an economic competitor and a systemic rival. Experts see this clear choice of words as a paradigm shift in the EU’s approach towards China.

This also applies to the EU’s condemnation of human rights abuses in China, argues Joshua Rosenzweig, who is a long term observer of foreign relations with China. „Particularly since 2019, the EU has assumed a much more robust position with respect to China and took a stand on human rights issues. The EU has increasingly engaged in voicing opposition to human rights issues like the erosion of civil rights in Hong Kong and the pressure put on human rights activists and lawyers in mainland China.“

Previously, the EU has tried to make China a more responsible country by integrating it into the global trade framework, writes Mark Leonard, Director of the European Council on Foreign Affairs. He believes this plan has failed: „Under President Xi Jinping, the Chinese state has increased its role in the economy, and Chinese markets have become less hospitable to European companies.“ He says the EU has now backtracked from its ambitions to intensify economic relations with China, aiming to cooperate more with other countries‘ companies.

Amnesty International’s Rosenzweig believes that the EU’s strategy towards China must contain three parts in the future. „They need to be able to call out China loudly and firmly, and they need to build coalitions beyond Europe to hold China accountable. But they also need to reaffirm and demonstrate the importance of human rights and the rule of law at home“, he explained, pointing out that it is easy for China to challenge critical voices like the EU if their own record on human rights is not untainted.

Meanwhile, the coronavirus pandemic has painfully shown the EU member states how much they rely on Chinese production. The health equipment sector was mostly outsourced to China and India. As a consequence, many European countries were forced to wait for face masks and personal protective equipment from China when the pandemic hit. Compared to the beginning of this year, China could (as the only one of the largest trade partners) increase its exports to the EU during the pandemic. In April 2020 alone, the member states purchased 129 million Euros more in articles from textile fabrics (including face masks) than in April 2019, according to Eurostat.

This has prompted the German Minister for Economics, Peter Altmaier, to encourage EU member states to diversify their supply chains and restart domestic production of healthcare equipment. His subordinate, Dr. Hegels, elaborates, „of course it is not very good to be dependent on one country which produces masks, for instance. The crisis has reinforced the need to diversify and keep open markets.“

„Beijing has often weaponised mask and PPE deliveries for geopolitical gain, and at the beginning of the crisis, it exploited Europeans‘ scramble for medical goods“. For instance, in the EU’s backyard, China might have been able to increase its influence due to COVID-19. Serbia, a candidate country for accession to the EU, has praised the Chinese for their medical assistance during the pandemic. The Chinese aid instigated the Serbian President Aleksandar Vučić to lash out against the EU: „European solidarity does not exist. That was a fairy tale on paper.“ Only China was able to help, he continued.

Not even all of the EU’s current member states might fully agree with the Germans‘ new critical stance on China. To ensure the future viability of the policies of its presidency, Germany will work together with the subsequent presiding countries Slovenia and Portugal in a Trio Presidency, formulating a joint agenda.

Both Slovenia and Portugal have in the past experienced significant Chinese investments in their companies. Portugal saw increasing Chinese investments amidst the financial crisis in 2011 and the debt crisis in 2014. The Portuguese Ambassador to Berlin, Francisco Ribeiro de Menezes, explains, „Portugal has had a successful relationship with China in terms of investments in important sectors of our economy, namely during the financial assistance programme.“ Slovenia, on the other hand, is part of „17+1“, an economic partnership between Eastern European countries and China.

Still, the Slovenian ambassador to Berlin, Franc But, sees dangers in China’s expanding influence. He warns that China might try to split the member states into two or more groups to weaken the Union’s position towards China. „The European Union has reached a dangerous degree of power in the world,“ he says. To countersteer, the EU should overcome divisions and focus on strength in unity, Ambassador But believes.

Joshua Rosenzweig argues there is evidence that this is all part of a Chinese strategy, which he calls ‚divide and conquer‘. „The EU has a very clear idea that economic interests and human rights should be intertwined, but China has tried to pry the two issues apart and use that leverage not to be held accountable.“ Still, he remains optimistic: „There is also evidence that the EU has been able to overcome China’s efforts and speak with one voice on some issues.“

The member states are doing it „their way“

The EU’s new urge to find a common approach is also related to the member state’s reluctance to pick sides in the US-China trade conflict. The member states have decided not to stand behind either the US or China but to do it „their way“, finding a unique balance between the two powers. „The EU is adopting a strategic approach, meaning that it must uphold and defend its own interests and values. We use as a compass not the expectations or pressures from outsiders, but what the EU wants and needs,“ says William Fingleton, the representative of the EU in China.

In some areas, China is an even more valued partner than the US, who used to be Western Europe’s most reliable ally. Dr. Silke Karcher, Head of Division for EU climate policy in Germany’s Ministry for Environment, says, „China is definitely more of a partner when it comes to climate than the US right now. When the US administration announced its withdrawal from the Paris agreement, the Chinese came forward the next day and made it very clear that they would be true to the agreement, even though their biggest economic competitor would not be.“

The German government has taken on the ambitious task to unite the EU in a common approach towards China. But then came COVID-19, disrupting the negotiation of a new EU-China investment treaty and making the key Leipzig summit between the leaders of state impossible. The question that remains is: Is Germany enough of a European leader to make progress on the European realignment even during a global pandemic?

Valentin Dreher
...spends the time during Corona in his hometown of Hanover, which he thinks is highly underrated. When he is not writing for politikorange, he likes to cycle or meet friends (while maintaining social distance of course).