The second part of the project, Researching identity in/between Israel, Palestine and Germany, took place in Israel and Palestine. We met again with our young journalists from each of the three regions and conducted an intense, 10-day program about history, religion, culture, and war. And we learned what it means to really get in contact, and to see each other as people. 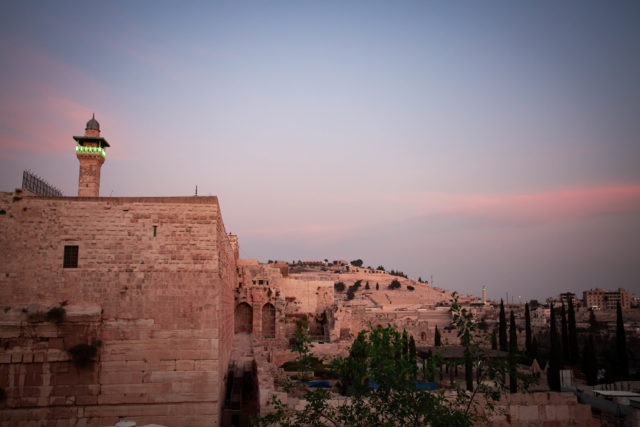 „How did you choose the participants?“

This might be the hardest question the interrogator at the airport is asking me. How can I explain to her that this project is actually about understanding, and not about taking sides?

Israel is known for its rigorous security checks at the airport, including awkward questions about every little detail of your travel. „Where were you? Whom did you talk to? What were you doing in Morocco three years ago, and with whom, and why?“ The background of this questioning involves a long and complicated history between Israel and its Arab neighbors, dating back to the creation of the Jewish state in 1948. Part of the workshop, Researching identity, was to absorb the variety of multilayered perspectives and narratives on the conflict.

Warfare is basically written into the genetics of Israel, a country that lives in constant defense mode for fear of its neighbors. But the heavy weapons carried by soldiers on every street corner of Israel and the West Bank – including those in the hands of militant Israeli settlers – are not the main tools of dominance and authority. For the young German journalists in our group, some were experiencing the world of open racial profiling and security checkpoints for the first time in their lives:

„Why do we have to feel guilty for staying in Ramallah? For visiting Bethlehem and Nablus?“

„Why do we only mention our partner organization Jerusalem Press Club, and try not to speak openly about our other partner, the Palestinian Peace Coalition?“

Everybody wants peace, on paper, right? 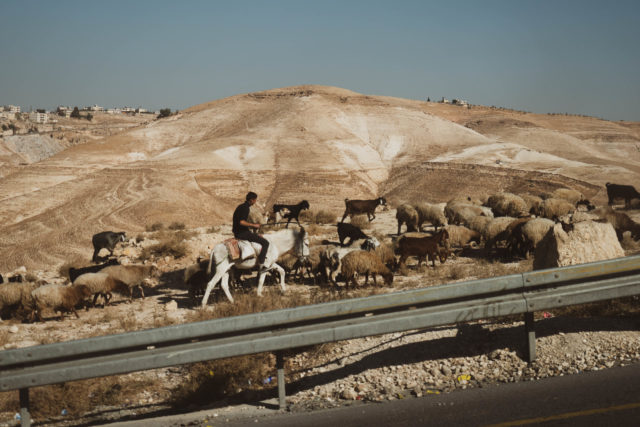 The trip which I would be defending in front of Israeli airport security, actually began years ago. In August, 2018, a group of politikorange participants were scheduled to travel to Israel and the West Bank to meet with other, young Israeli and Palestinian journalists. Several conversations with sponsor institutions and foundations resulted in a number of makeovers to the program concept, and a two-part plan. First, two groups of young journalists chosen by the Jerusalem Press Club and the Palestinian Peace Coalition would come to Berlin in November 2018 for an eight-day program about Jewish and Arab life in Berlin, and the media landscape in Germany. They spoke with journalists, visited media outlets and organizations, and articles were written by groups of three: one Israeli, one Palestinian, and one German.

It took another full year to realize the second part of the plan.

“I came here not knowing much about the complications of the conflict. Now I know even less”, admitted a participant from the German group during the feedback round on our final day after finally visiting Israel and Palestine last month. The conflict wasn’t supposed to be the main focus of the program. Above all, we wanted to bring young people together – who normally wouldn’t have the opportunity to meet – through their writing. The central theme of the workshop – identity – can be very political, but doesn’t necessarily have to be.

What we experienced during our time in Israel and Palestine, however, was how deeply peoples‘ feeling of identity is connected with the background, the beginning, the development, and the casualties of the conflict. Primarily we heard stories about loss. Loss of land for one, but also loss of homes, family, religion and culture. 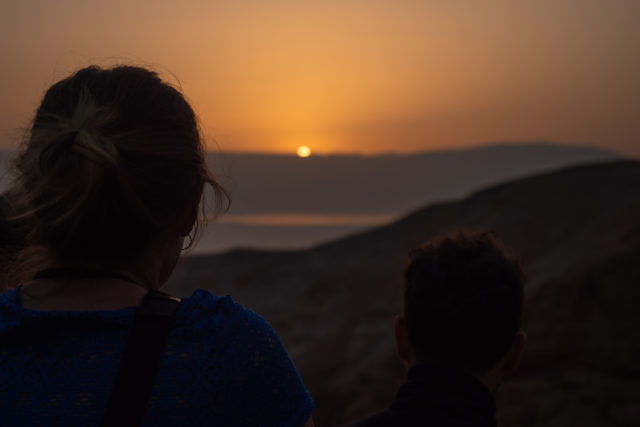 During our odyssey of talks, input, visits and conversations all over Israel and the West Bank, we met with settlers who cooperate with the Palestinians, and are convinced that they are a part of the peace building process – even though settlements represent Israeli land-grab politics, taken at large. We met a woman from a Bedouin community in the Israeli desert who single-handedly runs a catering business, unbeknownst to her husband, but has never heard the word “feminism” before.

We met a talkative security analyst at the border of Gaza who has dedicated his life to keeping Israel secure using all the latest technologies and tactics. “When a civilian is closing up on the border, Israeli soldiers would yell ‘stop’ once. When the person doesn’t back off then, they would yell ‘stop’ a second time, and when the person is still not listening to the order, shoot in the ground first.” The noise from a military training camp echoes over the empty fields that separate us from the massive sand piles on which soldiers are supposed to lie on for their lookout.

We also met Sharon Shelly who used to live with her two children in the little town of Sderot – the place most likely to get hit by rockets fired from Gaza. In her view, military protection methods are not the solution to keeping humans safe: “We must come to an agreement. A solution. That would be an independent Palestinian state.” 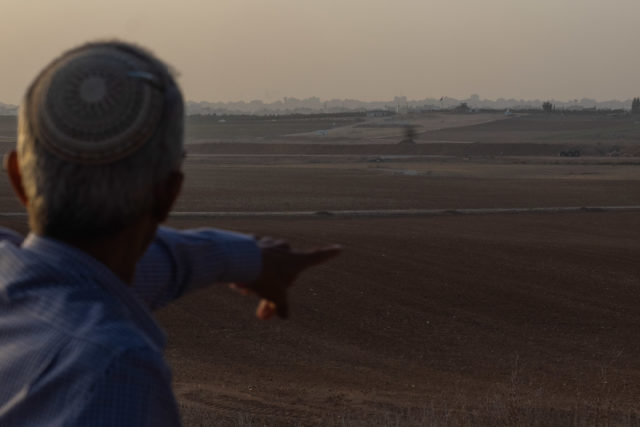 Cut to Bethlehem a couple of days later. We’re sitting at a table in the beautiful café of the Walled Off Hotel and are talking to Dr. Sulieman Abu Dayyeh, head of the Palestinian department of the Friedrich Naumann-Stiftung. His wife is the Palestinian ambassador in Berlin, who we already met during our workshop one year ago. „With all the inner-Arab conflicts in the Middle East, why is the whole world so obsessed with the one between Israel and the Palestinians?“, the group asked him. ARD correspondent Mike Lingenfelser, who is currently stationed in Tel Aviv and who we met at the ARD studio, pointed out that there are more journalists living and working in Israel than in Washington or Brussels – two places representative of the news and politics for all of USA and Europe. Still, more people are curious about what’s new in this tiny and complicated area of the world.

“I’ll tell you why”, Dr. Dayyeh replies, “because Jews are involved.” We were waiting for him to elaborate but nothing happened.

“Because the whole world has some sort of special relationship with Jewish people?”

“Exactly”, he replied. So much more would need be said – especially regarding the relationship of the Western world with Israel, the Zionist idea, the bond of the Palestinian people with the Arab world, and again their history in relation to the Jewish minorities that lived in each of those countries. But our time for each talk is limited. We have to work with the fragmented – and in parts contradictory – insights we get. 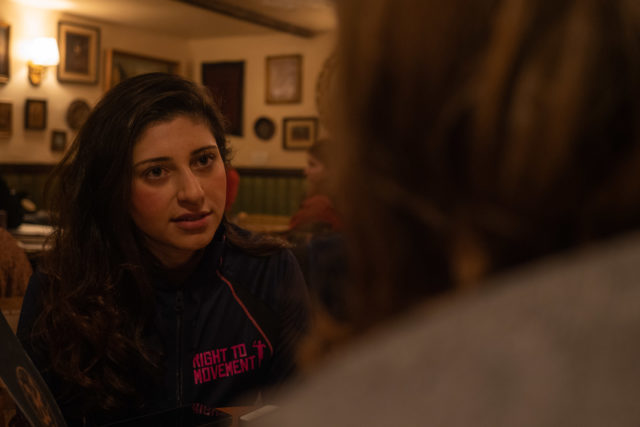 From the red rocks of the desert to the skyscrapers in Tel Aviv, from the scents of herbs and soaps in Nablus to the celebratory lightning of the Christmas tree in Ramallah. We visited two very different places. Two different countries, if you want. As much as Israeli and Palestinian history, religion, and culture have in common, in the same way do these people and places have a different speed and take on life. Mostly, both groups have a different narrative on their common history and each is righteous and relatable in its own way. That will be the essence of many articles from our participants.

A life between borders

What do borders mean in a political situation like this? Does the nightlife wash away the pressure of checkpoints, colored passports, and red signs that segregate people and foster fear? What role does the modern woman play in societies like these? And can money alone free the Palestinians, like the project of the city Rawabi suggests?

Or is it actually about fighting all together for basic human rights, like the Palestinian initiators of the „Right to Movement“, who simply want people to be able to run without being constantly stopped by settlements and checkpoints. They are fighting for the freedom of movement, and they are fighting for women’s freedom in a traditional, Muslim society. The question of power and resources plays a key role in the analysis of the political situation. On our travel we learned about how religion, history, and identity tie-in with land and ownership to inform government policy and shape economy. 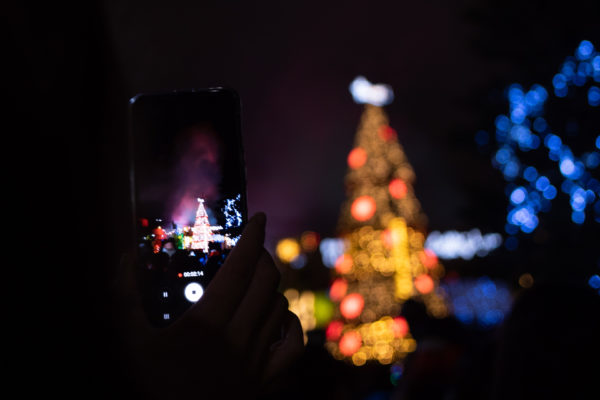 The tree in Ramallah shines bright till Christmas – and so will the politikorange blog with various insights into the life and culture of a deeply divided land between the Dead and the Mediterranean Seas. My answer to the airport authority’s question on how we chose the participants: „On their writing.“