“The failure of Africa is also a failure for Europe.”

Dr. Claude Kabemba did his PhD in international relations at Wits University Johannesburg and is running a development organisation. In an interview with Henri Maiworm he explains why the colonial powers have never left Africa, what China does differently and what is the main reason for exploitation in Africa. 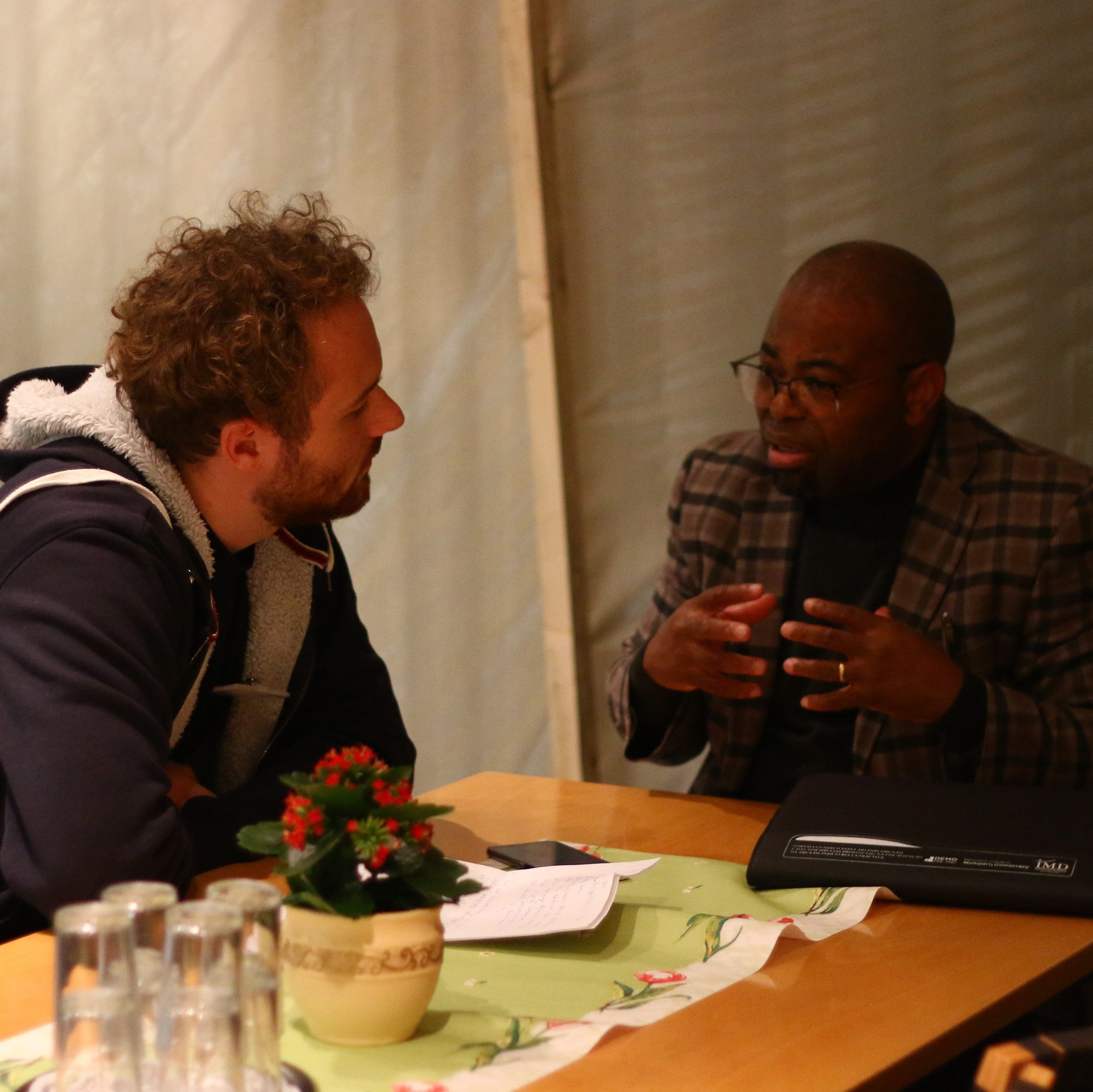 Dr. Kabemba, you are heading Southern Africa Resource Watch and you are an expert about natural resources in Africa. Many African countries are abundant of natural resources. Which role can these resources play if it is about the aspects of development and wealth creation?

When you see other countries that have depleted their minerals like for examples many countries in Europe, they used these minerals to create wealth and diversify their economy. That is something where Africa is failing because Africa is caught into a difficult situation with a lack of efficient leaderships, which do want to serve their citizen and not themselves.
But it is also important that we take the African development direction away from minerals alone. There are a lot of other sectors that can be better then minerals and we don’t talk a lot about those.

Which sectors do you mean?

I am talking about agriculture – Africa has one of the most arable land, good water in many parts of the continent or tourism, which is another very important sector that can help to bring in foreign money and use that to diversify the economy.
But we also need to talk about fisheries to ensure there is an industry: Right now, most of the water we have in Africa is not used by African fishermen. The European, the Japanese, the Chinese – all the foreign fishermen are coming to take fish from Africa. Mostly this has to do with the internal weakness in Africa which is more pronounced on the leadership level. If Africa really want to utilise all this, they need to have a strong position, that is why regional integration within Africa is important.

You are also criticising the EU for showing double standards when they are interfering with African states especially if it is about democratisation processes. What behaviour are you expecting from the EU?

Out of historical reasons the EU has the responsibility to continue talking and ensuring that the right things happen. But you see, the irony is not that the EU is simply retreated because it was too much involved. It is because there has been contradiction in the EU involving. Why would you take certain value for this country and you do not apply the same value on another one? I am asking the EU to act after its values in all its relationships whether with Africa or the USA. Today their interferences divide and weaken Africa. Since independence to now a lot of European investment happened but it did not work. The failure of Africa is also a failure for Europe. Mostly the failure is an African leadership problem. The European Union has to invest in building a strong citizenship in Africa that can hold governments accountable. You cannot account government with pressure from the outside alone. You need people who will stand up to their leaders.

In the European perspective Africa is suffering under its stereotypes of poorness and hunger. Are there African countries which could function as a good example for other African nations?

You can take countries like Ethiopia with an extraordinary progress over the past few years. The government is very strong on the fight of corruption. Or you have Ghana. Until recently we have seen a little reverse in the progress Ghana was doing but Ghana has always been a shining example through its democratic process. We have also Senegal – a country with very few mineral resources but with very active citizen and a very strong democracy process. Rwanda is one of the most shining examples. With Paul Kagame Rwanda has a strong leader – but some would even say he is a dictator. This is where we need to talk: Is it good to have a strong leader, political stability and economical development or to have democracy, transparent free elections with a collapsed economy?

What do you prefer?

In general, I believe that for African countries democracy provides a strong foundation for sustainable development and growth, which can prevent reversal. The case in Rwanda is a special one because of the history, where its coming from. But  there is also the hope that when the institutions are strong, they will be open up and there will be more freedom and more participation for the people. Is it sustainable? That is a question only time can answer.

Are there examples of countries, where natural resources functioned as a key for development?

The entire South African economy is coming from minerals mainly by the South African Gold industry. There is also Botswana and Namibia, which is being built by its diamonds. If we have a look at the North of Africa with Morocco, Tunisia we see a little bit of consistency. I think Libya was the perfect example of how to use oil to empower people. But this was interrupted. This case of Libya showed us why the West has a problem helping Africa.

Natural Resources can also cause human rights abuses and even war and conflicts – If we think about countries like South Sudan with oil or Sierra Leone with diamonds. How can this be prevented?

One of the biggest investors in Africa is China, which is investing a lot in infrastructure but has also started many mining projects. Can China be a good partner for African countries, if it is about accessing and extraction mineral resources?

The infrastructure that is put into place is there to extract the minerals not to help the society. China has found a fertile soil that was well prepared by the western countries to exploit Africa. Western countries have left Africa in a totally disruptive situation where China can come in and take. What China is doing differently than Europe is that they are doing some of the mega big infrastructure development projects which the Europeans refused to. Europe was putting money in soft investments like education, health or peace. They were not investing in roads or bridges. In the end, it all comes to the question: Does the African government negotiate correctly with its partners. One of the issues we identified is weak negotiation capacity, but this is also deliberate because we want to take the brown envelope under the table.

So what you are basically saying is that the colonial powers left Africa and China stepped in?

No, the colonial powers never left. They are still there, very present in fighting about control. There is a struggle between the newcomers and the old. It is just simply that everybody has seen that Africa is an empty space you can come in, take what you want and go. China is doing that, Russia is coming back, Turkey is coming back and many others. Everyone is focussing on extracting, exploiting and taking from Africa. African leaders are helping them for little interest, but they take everything. China is doing what others have always done on the continent. The challenge for China and Europe is that they are creating a partner which is becoming a monster. As things get worse, there will be no development. Like this you will never stop people looking for a better life. China is sending so many Chinese to Africa, but at one point Africans will go to China, because as long as they don’t find their ways in Africa and China is prospering they will go there just as they have come to Europe.

In your speech you said: “We should not forget the historical context if we talk about an EU-African Partnership.” But you also said the relationship has not changed much in comparison to colonial times. How would an equal partnership between Europe and Africa look like?

An equal partnership will only work if Africa is ready to protect its interest and negotiates on an equal basis by standing on its position and decisions without being pushed by its partners. And it is not only the EU, it is also China and every other. It seems to us that Africa is just too weak to stand on its positions which are good for its benefits. That is why there is a strong call for integration for Africa to built a strong block to negotiate and speak with these big powerful countries.

The German Marshall plan is supposed to assist African countries in development. Is a plan which is organized by western countries the right plan for Africa – or would an African plan for Africa be a better choice for the continent?

Africa has it’s own plan for development with the Agenda 2063, we don’t need another one. Why create a new one? If the Marshall Plan supports the goals of Agenda 2063 – why did you create it at all? I am very critical with the Marshall Plan. Because it is selective and destroys the spirit of regional integration. It divides the countries and puts up conditionalities for the countries to join.

What does Agenda 2063 mean for the African states en detail?

It is an aspiration with goals around democracy, peace, sustainable economical development, industrialisation, agriculture development, protection of the youth and women but also around value addition to minerals and infrastructure building.
The Agenda 2063 is a very organised reflected vision of the challenges which this country has to deal with. The problem is that this is not the first time Africa came up with a blue print like this. The visions before were similar but they all failed – failed because Africa puts up this Agenda and waits for Europe to come to fund it. But if you are getting this agenda founded by non-African countries they got leverage on imposing. For example they might decide to fund a railway but they will decide where this railway must pass. This will distort the development plan. Africa needs real investments.

Most of the natural resources of Africa are getting exported without value addition – if we think about cocoa or coffee. So most of value adding process gets handled outside Africa. How can this issue be tackled?

Strong and committed leadership is the only way. African governments have to make decisions to not allow this from happening and they must stand to this decisions. The question is if we are having leaderships which are strong enough. Value adding is not a new thing. In the 1960s, when many African countries got independent, there was also the goal of gaining control about our own resources. That is what one of the calls for independence was for, that is for what we fought, but since then nothing has happened in decades. This is not the fault of Europe or China. It is the fault of Africa.