Performing identity: A city to lose and find oneself

Poet Mati Shemoelof celebrates Middle-Eastern culture in the heart of Germany, theatre director Sharon Kotkovsky identifies more strongly as an Israeli-Jew since she moved to Germany and film director Jakob M. Erwa explores identity in a city of acceptance. Sami David Rauscher and Noa Amiel Lavie talked to them about their choice to live in Germany and the way it influences their work. 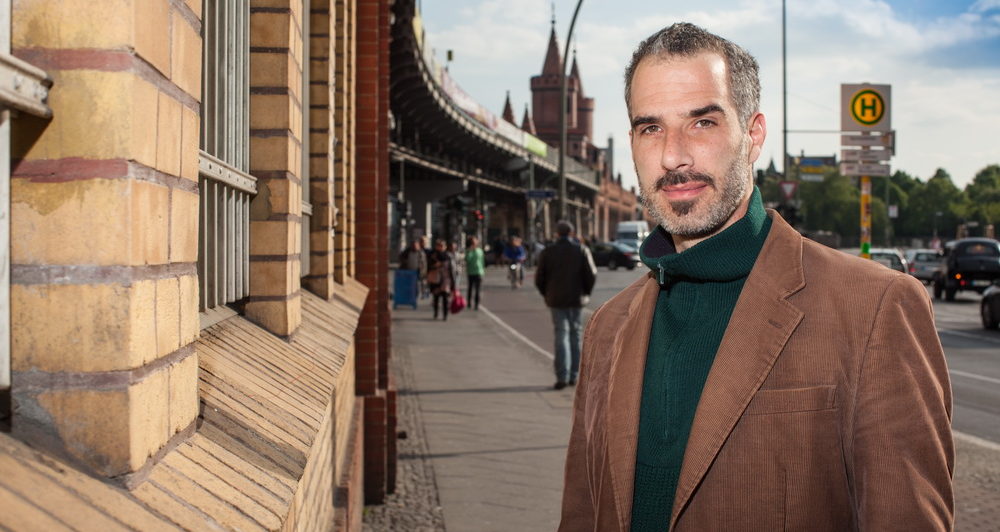 Mati Shemoelof, an Israeli author and a poet, has lived in Berlin since 2013 and believes the city allows people to explore their identity. »Berlin has no walls. The Middle East has walls, not only between Israel and Palestine, but everywhere. Berlin doesn’t force you to assimilate. In other capitals, such as Paris or London, the cost of living is pushing people out, but in Berlin there is this spot in the middle, that doesn’t force you to speak perfect German, but still welcomes you and gives you opportunities. Berlin, as Tel Aviv, is a very cultivated city and whoever comes here, does it in the name of creating and making art.«

Berlin is also an attractive city for those who grew up close by and are fluent in German: Jakob M. Erwa, director, screenwriter and film producer from Austria chose to move to Berlin many years ago. He values the city’s many opportunities to simultaneously forget and find oneself. »The city is very diverse and stands for acceptance. It is this reputation and reality of the city that makes me feel like I belong here.«

Shemoelof mentions that a lot of Israelis who are coming to Berlin think that they are about to be reborn at first. »Especially those who were part of Israel’s elite. This perception is similar to that of other Jews who came to Israel when it had just been established and thought they could erase their own history as Jews in the Golan did. I and the people that I’m surrounded by know that we will never become Germans. We are Israelis, we are still part of the families we left in Israel and we still want to diminish the colonial tension between Israel and Palestine, between Israel and the Arabic diaspora«.

Sharon Kotkovsky, an Israeli theatre director and performer, also found out more about her identity and its relation to history when she moved to Germany. In 2015 she decided to follow her German life-partner and moved to Potsdam. Kotkovsky first conceived a theatre project when the struggles connected with being an immigrant became increasingly present in her life. “But also because of the issue of language”, she says. “I don’t speak German fluently and cannot yet create in German. I wanted to bring a unique perspective to Germany – the Israeli one – along with my identity as an artist and as a person. When I left Israel and moved to Germany, I felt my identity in a way that I’ve never felt before, much more strongly. Because I’m a foreigner, I’m not German. And I knew that through theatre I could express myself better. It might be that one day I will speak fluent German and I could create something else, but that would also come from my perspective as an Israeli, as a Jew, as who I am”.

Kotkovsty knew that in Germany she could find a place to express and deal with her identity, “I guess it’s because of our shared history, the war and the holocaust”, she says. “Germans and Jews have a common history that cannot be erased. The strong diplomatic relations between Israel and Germany also help to bring these issues into Germany. I think that Germany is still trying to clean the ,guilt‘ or at least to deal with it.“

In Germany she found that she identified more as a Jew and as an Israeli than she had done when living in Tel Aviv, and she decided to bring this into her art. She met Sabine Wiedemann, a German director and theatre educationist, and together they established a theatre group that in June 2018 invited young people from Israel and Germany to take part in a seminar in collaboration with the dancing ram theatre and HochDrei e.V.. “The project ‘Schöne Schuld’ (beautiful guilt) lasted 9 days and brought together 12 people from Israel aged 18-26 and Germans of the same age from Potsdam and Brandenburg”, she recalls.

“The goal was to explore the subject of guilt from a personal perspective. We worked with documentary theatre methods including recordings of interviews with each of the group members. Besides this, we also dealt with the issue of identity, multiculturalism – especially tolerance and democracy – and all these big words, but through specific exercises”. Kotkovsky says that although the Holocaust was never an official subject in the seminar, it was interesting to see how it came up especially through personal stories. “Also, the issue of identity came up through personal stories that the participants shared throughout the workshop. Eventually, they used their personal backgrounds for their theatre performance on stage. They tried to show each other what it means to be German or Israeli”.

In 2012 Mati Shemoelof, originally from Tel Aviv, was invited to a translation workshop by the Literaturwerkstatt. “Back then, I didn’t think I was about to leave Israel, or even deviate from the path I was on, because I was at a good moment in my life: I had a column in a newspaper, I was a well-known poet and participated in a poets’ community named ‘Cultural Guerilla’”. It was 2012 – a year after the Israeli social justice protests – Shemoelof had been one of the pioneers. A year after the protests, the atmosphere among many Israelis was of disappointment because nothing had changed. “When I was invited to Berlin it was a critical year because there was a relatively big wave of Israelis who had moved there. In the meantime, another war broke out in Israel (Operation Pillar of Defence), another right-wing government was established, and the social justice protests had led us nowhere. When I was invited, I was thrilled by the new opportunity to write outside of Israel. It was my very first time in Germany and I think I stayed in Berlin for almost one month. I met a lot of Israelis back then, most of them are already back in Israel. I went back to Israel and decided to move. I departed again in September 2013, and since then I’ve been here”.

It doesn’t seem too difficult to find a new home in this city. Jakob M. Erwa shares the sentiment that Berlin is different to other places in the world. His last movie Centre of My World, including a gay love story, was screened by film festivals all over the world. »In Moscow we were confronted with an audience that was incredibly thankful and moved to tears. Finding out about the horror the queer community is facing there made me feel even more thankful of the conditions in Berlin, even though not everything is perfect here«.

Berlin itself is not a safe space: There have been around 40 violent attacks directly linked to racism in the first half of 2018 according to official police statistics. In the first nine months of this year, 105 criminal offences had a homophobic or transphobic background. Activists regularly point out racial profiling that happens in the city.

Berlin’s community is resilient though. Safe spaces are established by those who want to change society for the better. Shemoelof is one of them. In 2015 he established a project named ›Poetic Hafla‹ with Barak Moyal, an Israeli artist who also had moved to Berlin. So far more than 17 events have been held. “The project celebrates foreignness and mainly the Middle-Eastern culture. Both of us, Barak and I, are Mizrahim (Jews who originally came from Arab countries) and these events are about getting together with Palestinians and local Arabs and it’s actually a celebration of the immigrants in Germany”, says Shemoelof. “We are talking about a multidisciplinary event: dance, theatre performance, poetry. I’m a poet, for example, so I present my poetry without subtitles. Others perform in French, Syrian, etc. Out of this mixture, what comes out, comes out. It can be either political, queer, or both”.

Shemoelof claims that celebrating foreignness is nice, “but I’m focusing on what happens when people are brought together. What are they talking about, for example. It’s not only about acknowledging other languages, but also the actual speaking. This is something you can’t do in Israel. On paper you can, of course, but it is not something that actually happens. Best case, you have maybe one Arab or one Israeli-Russian. What is special about Poetic Hafla is the celebration of different languages. This convergence of different people from the Middle East is not something that could ever happen in Israel. You can’t just sit with someone in Egypt”.

Sami David Rauscher und Noa Amiel
Noa (Tel Aviv) and Sami (Berlin) found that they are both passionate about Berlin, the arts and shopping for vintage clothing. Noa is an investigative journalist who works on a TV program called Zman Emet (“Real Time”). Sami is working for DeutschPlus e.V., an organisation against racism and discrimination, and also doing freelance work in journalism and political education. Both were found laughing a lot during the project time, but made sure everyone knew that they are taking their work very seriously.