The Worst View in the World

Blurring the borders between art and reality: “The Walled Off Hotel” by street artist Banksy features tourists and a view on one of the hotspots of the Israeli-Palestinian Conflict – an eight meters high concrete wall. Eylül Tufan took a look at the hotel and some of its pieces of art. 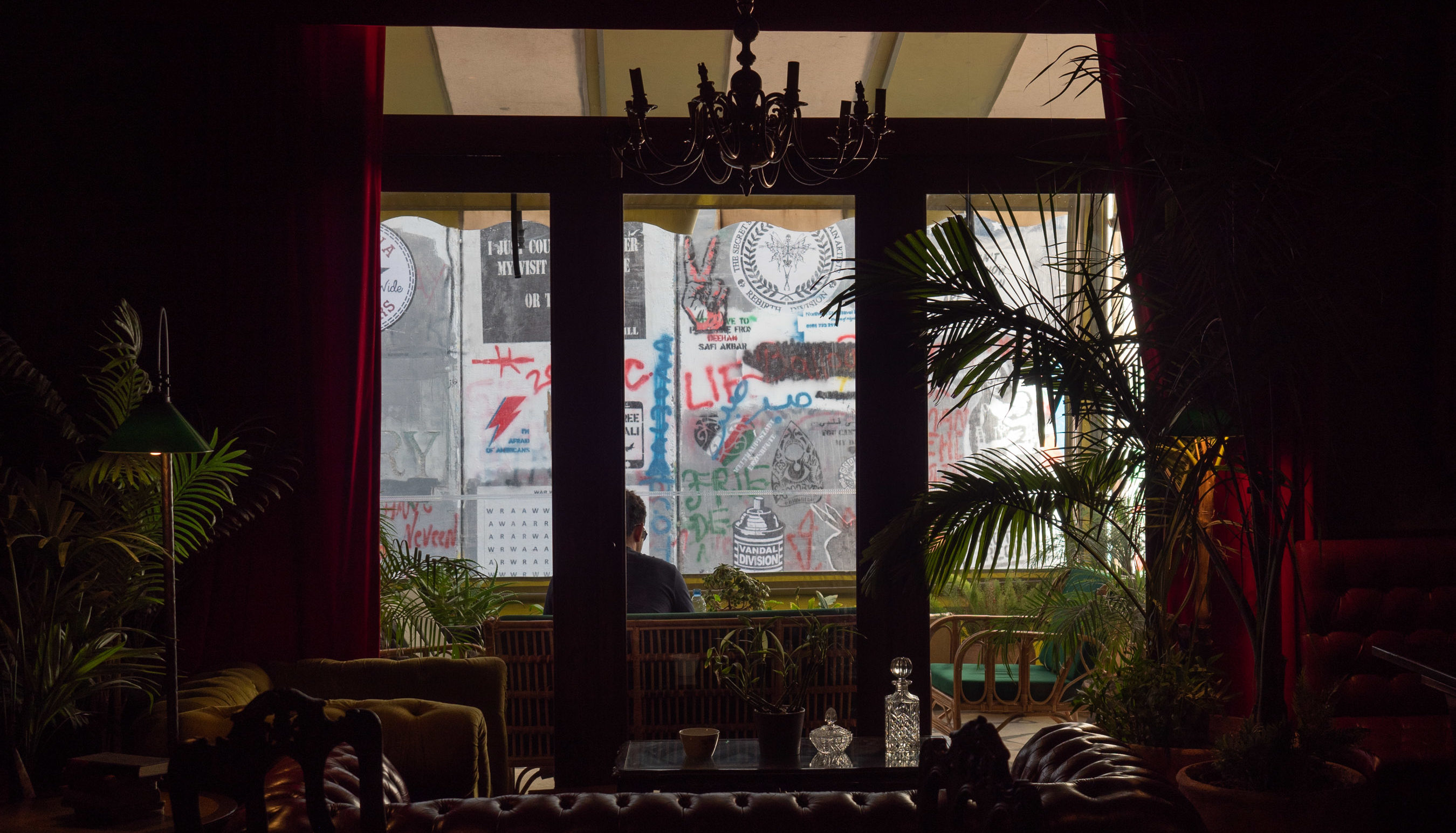 Surrounded by the eight meters high Israeli West Bank barrier – better known as Separation Barrier – the “Walled of Hotel” is known for its “worst view in the world”. Photo/Mathias Birsens

“The worst view in the world” doesn’t sound attractive when booking a hotel room for your next trip. However, exactly this feature pulls guests to “The Walled Off Hotel” in Bethlehem. Located 500 meters from the „Rachel’s Crossing“ checkpoint to Jerusalem and a mile from the city centre, “The Walled Off Hotel” is situated on the Israeli West Bank barrier.

Initially intended as a temporary art installation by the British street artist Banksy, “The Walled Off Hotel” opened in March 2017 and quickly turned into one of the most visited and controversial tourist attractions in Bethlehem. Next to the Israeli West Bank barrier – an 8-meter high and 700-kilometer long concrete wall along the border between Israel and the West Bank – “The Walled Off Hotel” provides direct view onto one of the hotspots of the Middle East conflict. Israel began constructing the wall in 2002 as a functional “security fence”, while Palestinians refer to it as “apartheid wall”.

In 2005, Banksy painted nine art pieces on the wall: famous motives like the silhouette of a girl rising through the air clutching balloons, or a dove of peace wearing a bulletproof west. Locals copied his artwork and started doing their own writings and drawings. Little by little, foreign artists came to Bethlehem and involved themselves too. Now the border between Israeli and the West Bank is not only an 8-meter high concrete wall, but a canvas for local and international artists and their own messages – a symbol for creative and nonviolent protest. 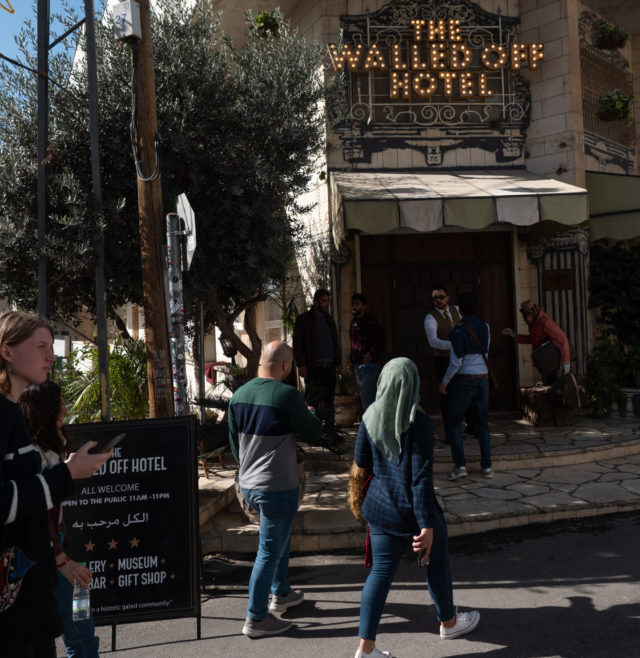 Since “The Walled Off Hotel” opened in 2017, it has become one of the most visited sights in Palestine. Located between the „Rachel’s Crossing“ checkpoint to Jerusalem and the centre of Bethlehem, the project by British street artist Banksy brings tourists from all over the world to one of the Israeli-Palestinian conflict hotspots. /Photo: Mathias Birsens

The colonial styled “piano bar” in the hotel’s lobby refers to the year 1918 – when the British Mandate for Palestine (1918-1948) was established in the aftermath of the end of WWI. /Photo: Mathias Birsens 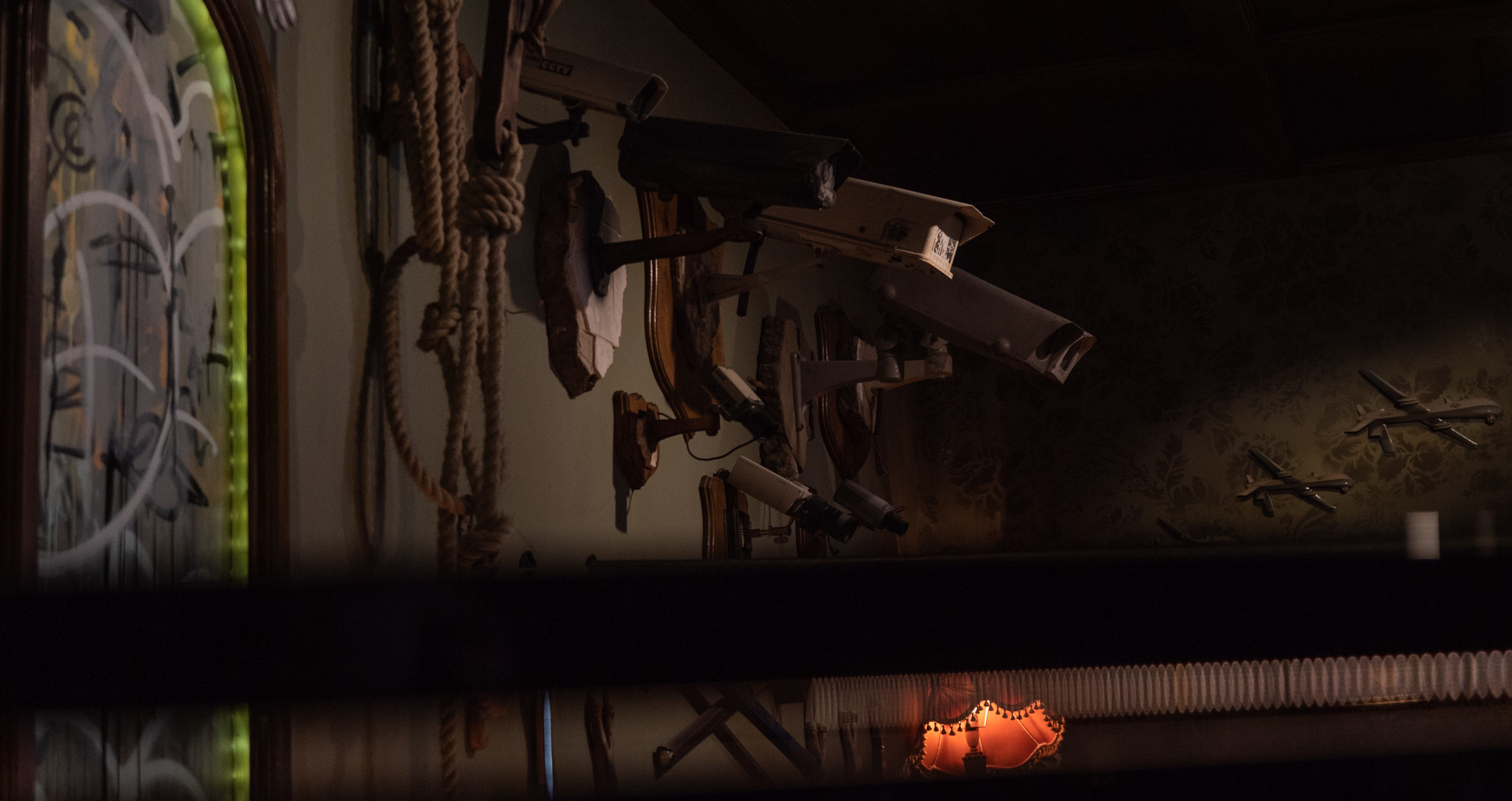 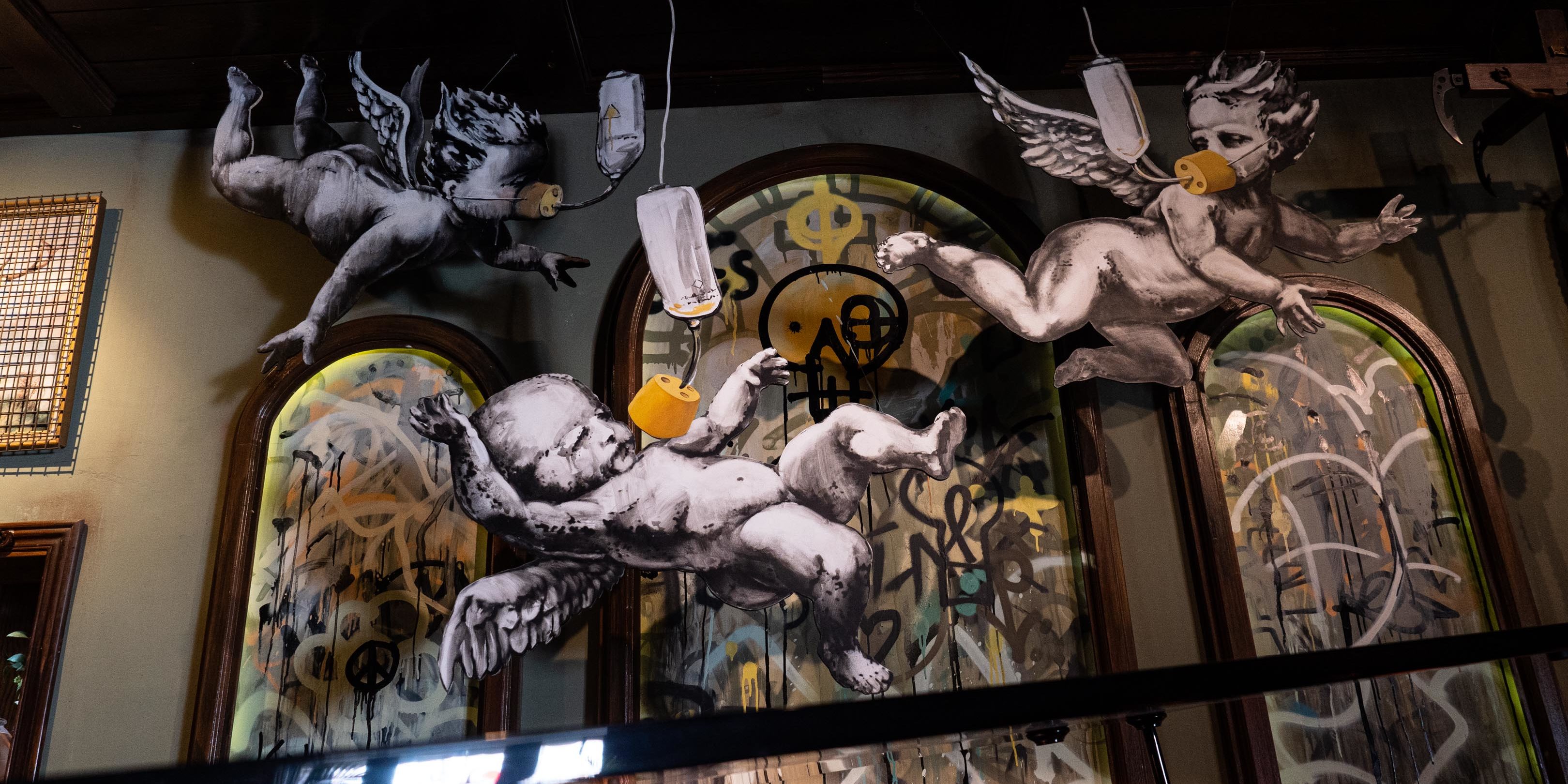 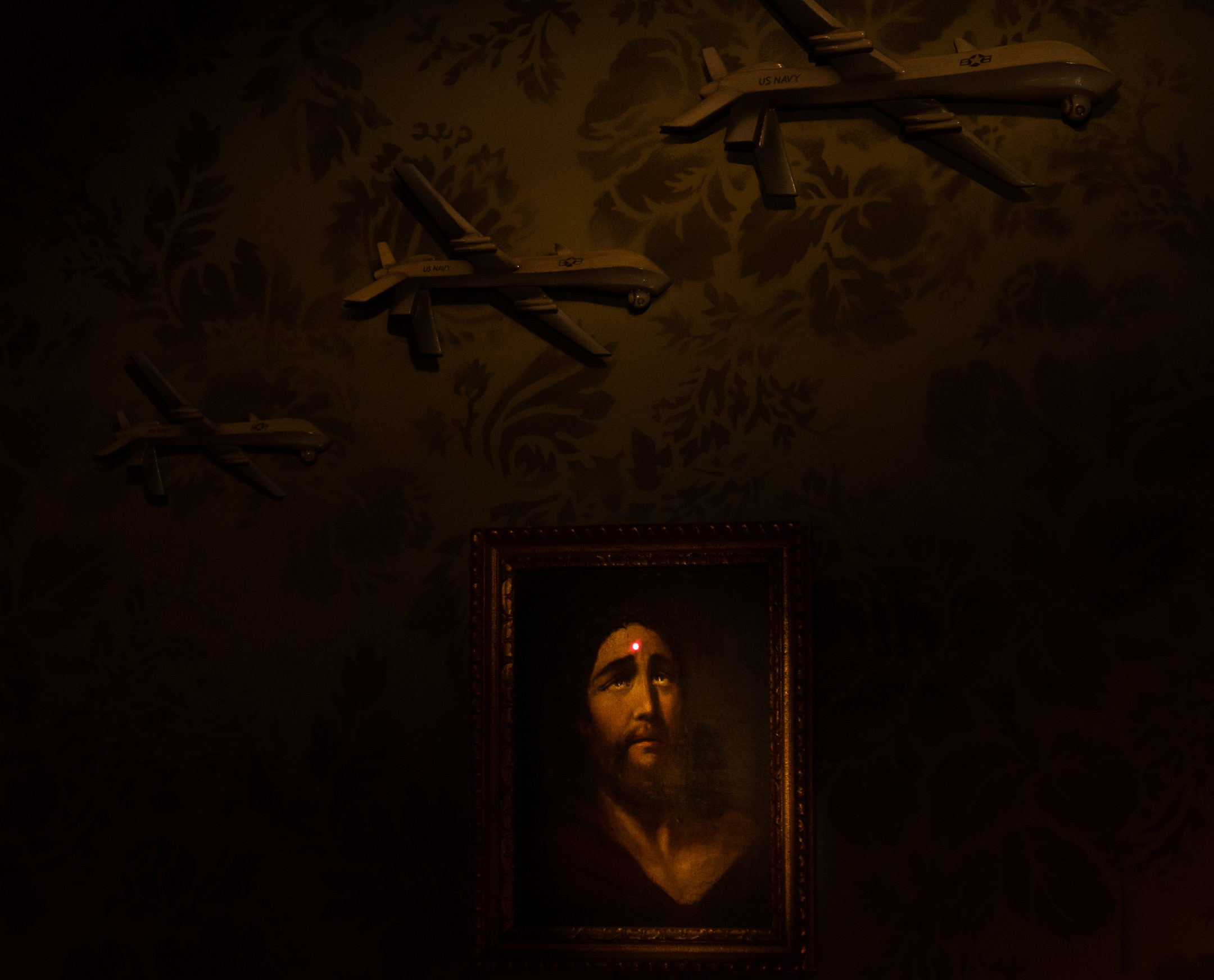 A portrait of Jesus targeted by three bombers flying over him (artwork by Banksy). Bethlehem, where Jesus was born about 2000 years ago, is one of the hotspots of the Middle East conflict and the location of violent clashes between Palestinians and the Israeli military. / Photo: Mathias Birsens 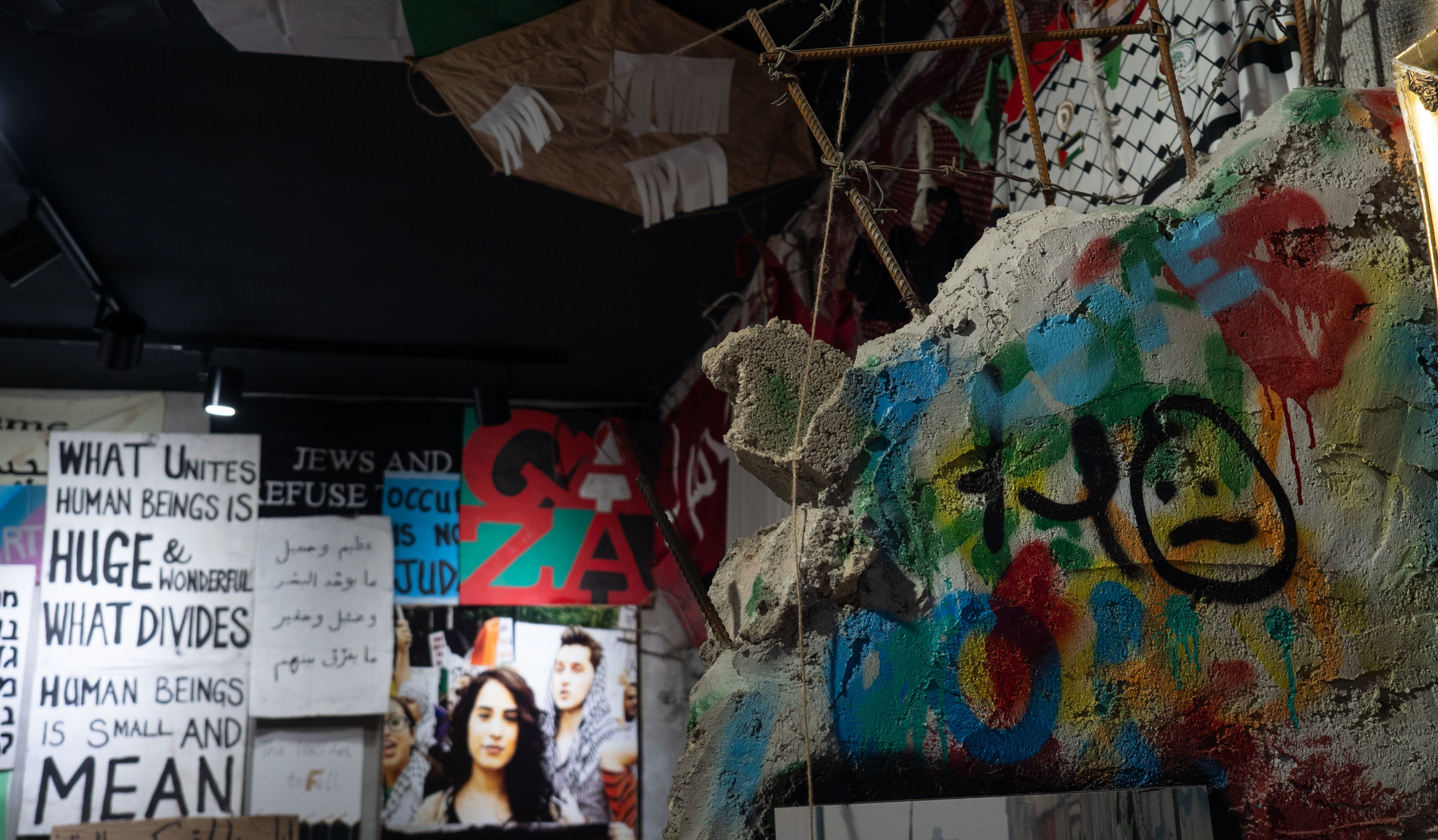 The “Occupation Museum” was curated in association with Dr. Gavin Grindon, senior lecturer for Philosophy and Art History at Essex University. Showing fact-checked material and artifacts donated by individuals, the exhibition tells the wall’s biography, personal stories, and gives insight into the Palestinian narrative of the conflict. / Photo: Mathias Birsens 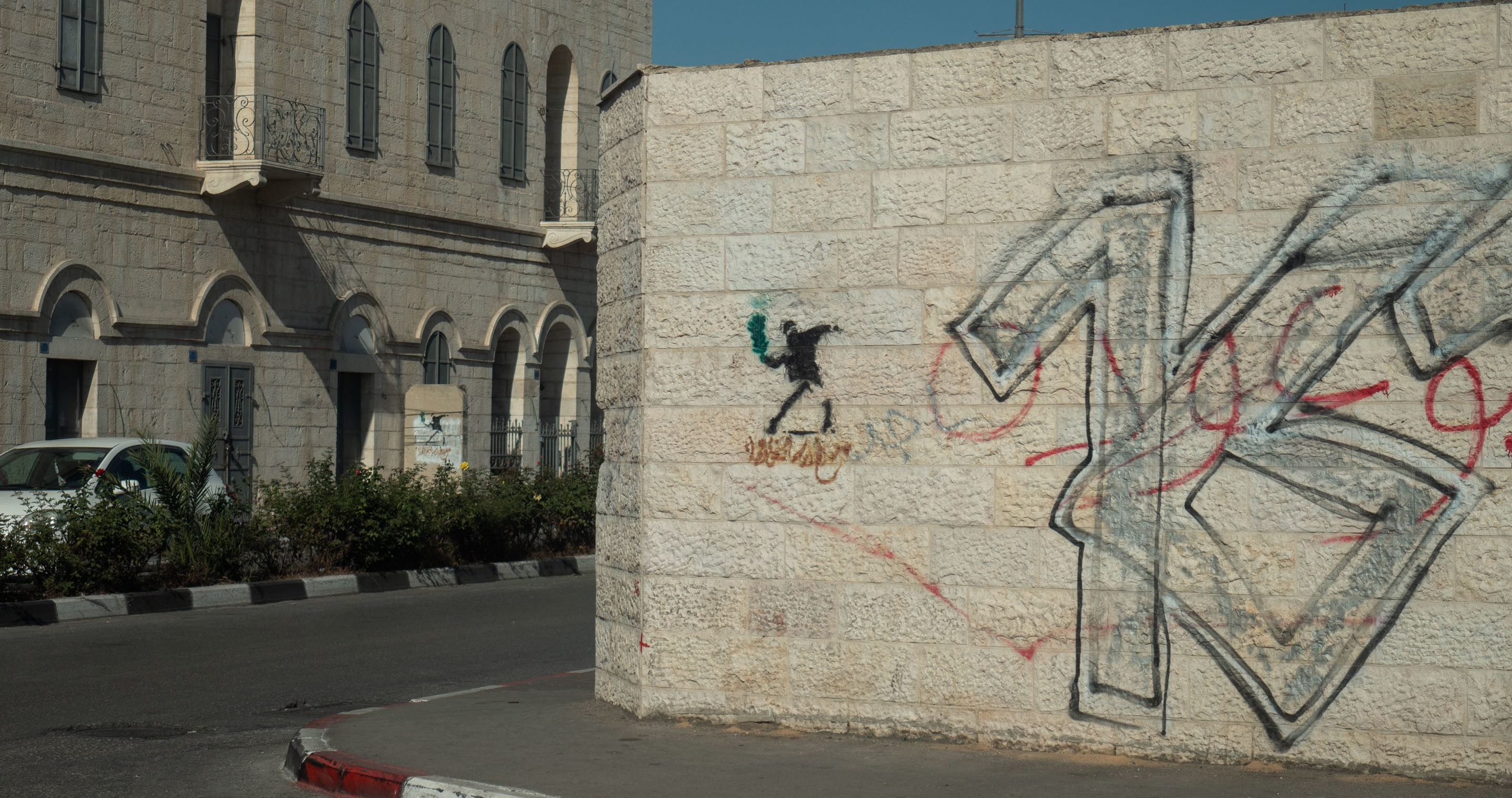 Originally spotted in Jerusalem, the “Flower Bomber” or “Rage, Flower Thrower” is located in the heart of the Israeli-Palestinian conflict – not only decorating the hotel lobby, but also several walls around the West Bank and Israel. The artwork is one of the most famous art pieces by Banksy and provides a universal message: the power of civil and non-violent resistance. Photo/Mathias Birsens

Many Palestinian refugees kept their keys as mementos of their homes lost during the Arab-Israeli War in 1948 – the “Nakba” (engl. “big catastrophe”), how the Palestinians call it – and the 1967 Six-Day-War. As a metaphor for the right to return, the key is a common Palestinian symbol for one of the main conflict issues – it can be found in many pieces on the Walls of Palestine (example: Bethlehem)./Photo: Mathias Birsens 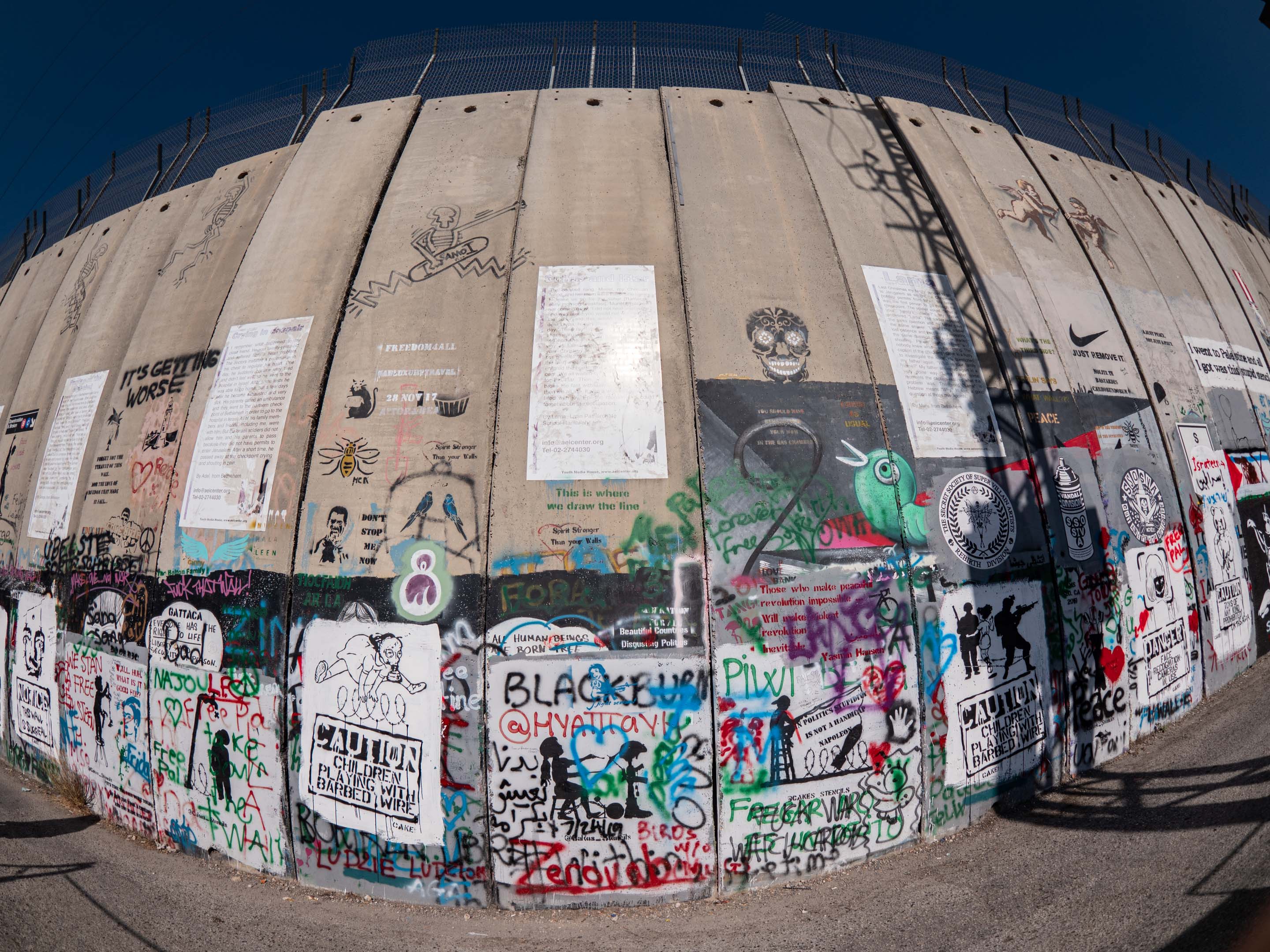 In 2005 street artist Banksy painted nine art works on the wall. Locals started to copy the motives and did their own writings and drawings. Also, international artists started to visit Bethlehem and involve themselves with the 8-meters high wall. The Israeli West Bank barrier is now a popular spot for graffiti artists expressing their political messages./ Photo: Mathias Birsens 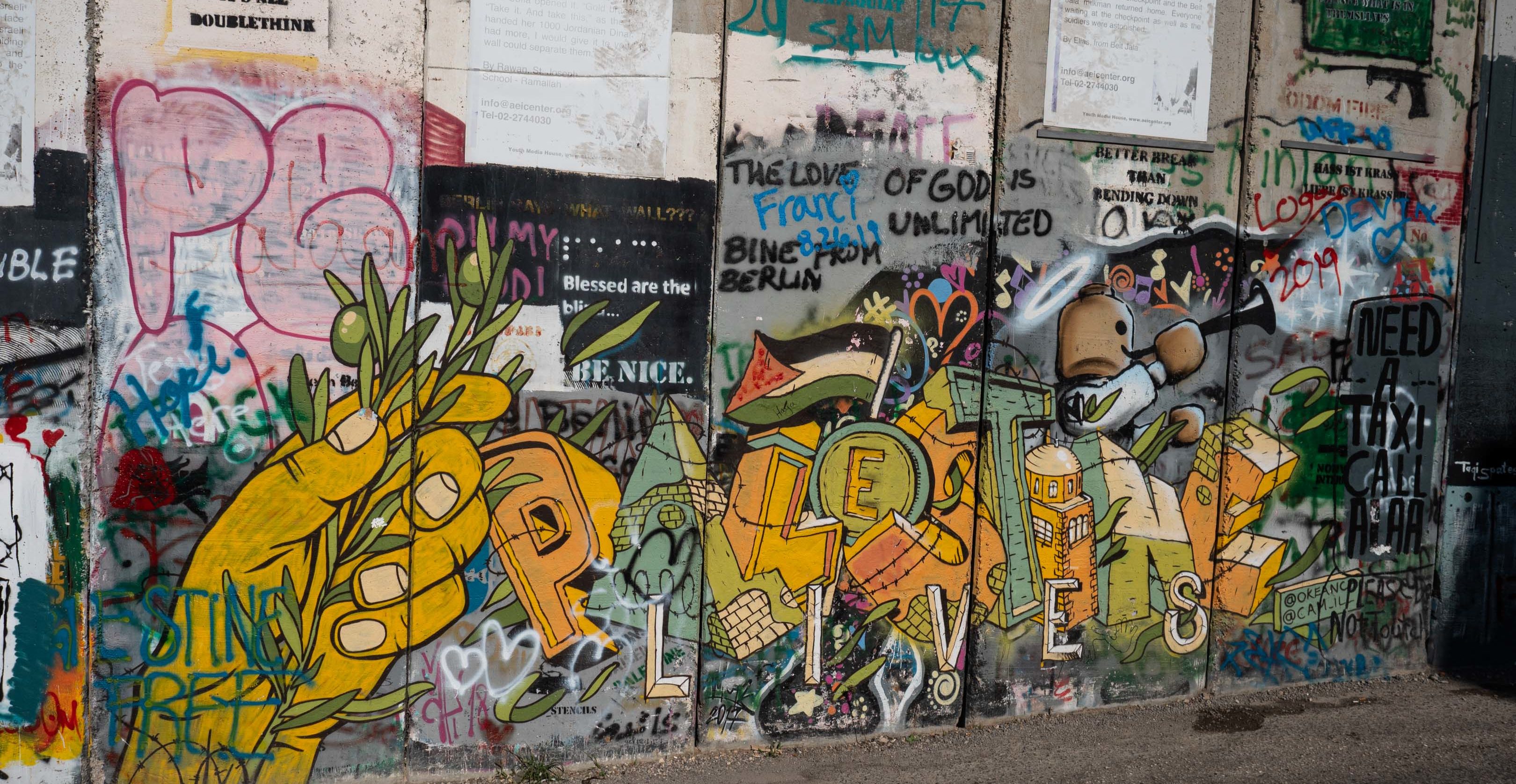 The Israeli West Bank barrier became a symbol for the power of peaceful protest and art as a tool of criticism. Nevertheless, the paintings on the wall are not uncontroversial: some Palestinians want the wall to remain unpainted, because it confronts the Palestinians with the conflict situation they currently live in. In their eyes, changing the walls appearance would “normalize” its existence. / Photo: Mathias Birsens 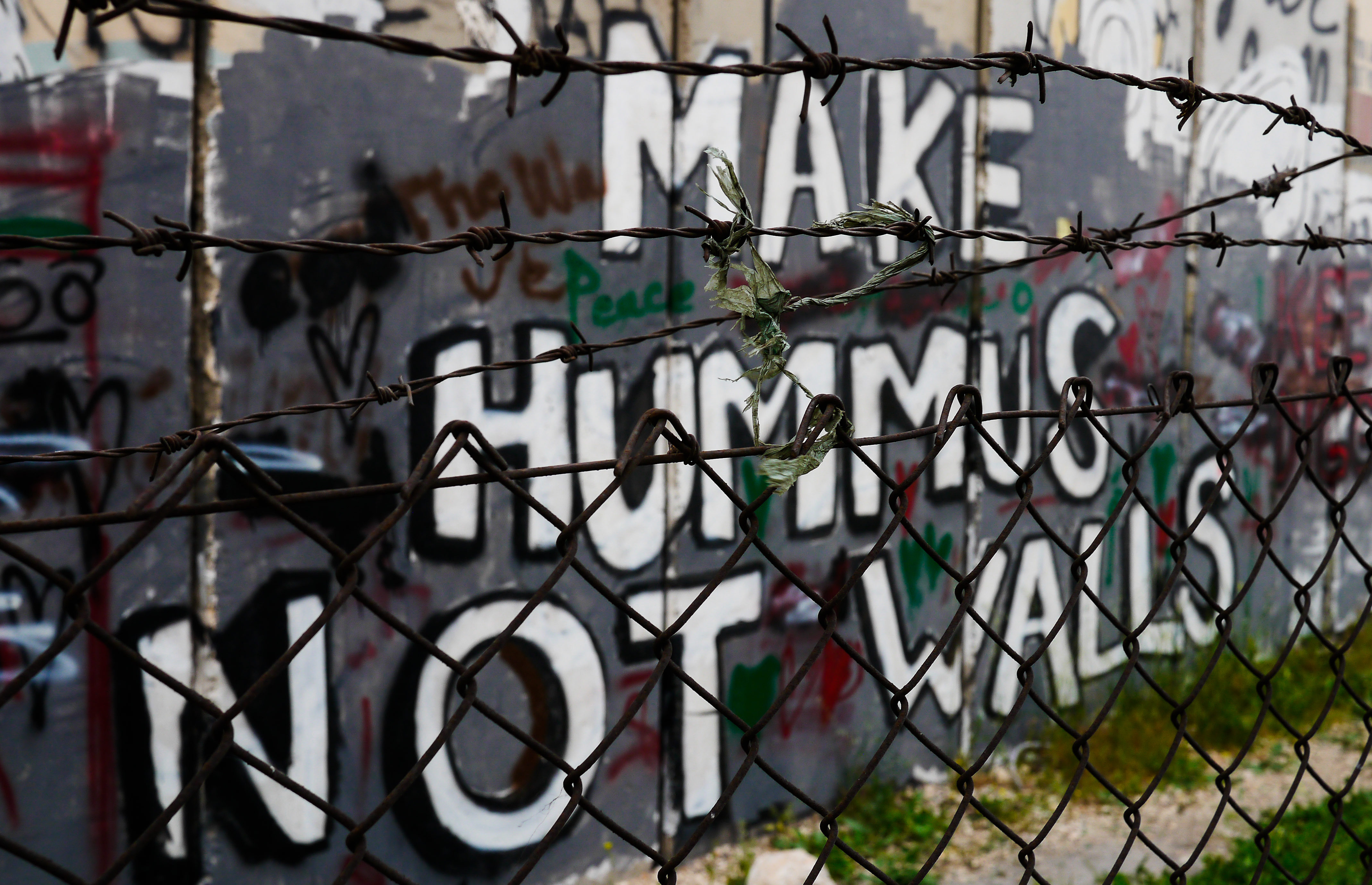 Hummus is a speciality from the middle east that is part of Israeli and Palestinian cuisine it connects both sides of the conflict – overcoming the wall between them. / Photo: Mathias Birsens

Eylül Tufan
Travelled to Israel and Palestine with the expectation of understanding the conflict’s political and social reality better. Left the country with the feeling of knowing even less than before. Probably that’s something good.